In an attempt to do something a little different after Christmas, while avoiding the various named storms, we headed off to the Winter Wonderland Manchester, at the Event City complex, just next to the Trafford Centre.

This is something that Leeds doesn’t have and so we gave it a go. We didn’t know what to expect, but it turned out to be a really good find.

As Winter Wonderland Manchester is next to the Trafford Centre, parking is free. However, traffic can be problematic due to the Christmas shoppers (even after Christmas!).  As we ordered our tickets online, we picked up our tickets at the entrance quickly and easily and we made our way in, still none-the-wiser of what we were going to see.

As we went through the entrance, we saw it….an exhibition hall full of fairground rides, attractions, shows, food – EVERYTHING!!

Included in the price of the ticket are all the rides and shows for a 4 hour session. The only things that you have to pay for is food, coin operated games (very few of those!) and games where you win a prize (such as hook a duck)

As you get 4 hours, it is advisable to do a couple of things:

As I went to Winter Wonderland Manchester on my own with Heidi, we concentrated on the children’s rides and there were plenty.  There were at least:

About half of the children’s rides were just for children, which was good if they want to have some independence. However, not so good if they get scared easily or are a bit clingy. If your child doesn’t like fairground rides, it is safe to say that this won’t be for you.

With Heidi being 2 1/2 years old, I wondered how she would get on, on her own. But she was fine. Not many of the children’s rides had a height limit on, which was good as there is nothing worse than a disappointed child!!  I wouldn’t have wanted to take a child under 2 as they probably wouldn’t like the rides and be stable enough to go on them on their own. However, 2+ years of age is fine. We must have gone on at least 15 rides, so it was definitely value for money for us.

Aside from the rides, there are also shows, which we didn’t see. They included Sooty, a Frozen show (both including Meet and Greet) a magic show as well as a circus show. The shows were well attended and so if you wanted to see them, get a seat early. One of the good things was that there was enough space at the front for the children to sit on their own. 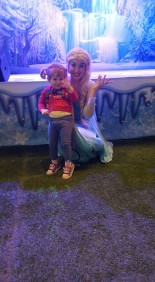 If you were adventurous enough, there were a good few rides just for adults. Obviously there are height restrictions on those rides, but there is enough to do if you wanted a child-free visit (if you’re into the fast rides!)

Verdict of the rides

In terms of the plus points, the rides are clean and look safe and generally the atmosphere is really good. We never had to wait more than 5 minutes for a ride, and there are enough rides to keep everyone moving. They also restrict the number of tickets so that it won’t get too crowded. This was such a plus point for us as the last thing you want is to be waiting to go on a ride with an excited child!

Also, as Heidi is under 3, she didn’t need a ticket. Children 3 and over need a full price ticket. This might put people with young children off as they won’t get as much value out of it as those with children who are 8+ years of age. I did find that Heidi tired halfway through but after a quick food break, we were good to go for the rest of the session. You should consider how many rides you will be able to go on in a 4 hour period and work out if it is worth it…

The food stands were standard “fairground” food stands, charging the usual prices. They were not overly expensive, but what you would expect from going to an attraction/event.

The staff manning the rides were professional, but some could have done to smile a little more!! This was especially true on the children’s rides – however, they were safe and that is the important thing.

Also, it can be a bit of a bun-fight to get onto the smaller rides as there didn’t seem to be a queuing system. However, the parents seemed to manage the situation and the crowds weren’t busy enough for it to cause an issue.

They almost got the baby changing facilities spot on! There was a number of changing mats on the floor in a blocked off area, which was fine. However, there wasn’t a changing mat in a cubicle, which would really help single parents. I couldn’t get into the disabled toilets to see if there was any in there. However, it is an exhibition hall and so it isn’t really geared up for babies and toddlers! The quiet room was such a good idea and I have never seen that elsewhere!

If you go before Christmas as well, you can also meet Santa and reindeers as well. However, as we went after Christmas, they were obviously resting after their travels!

All in all, it was a very enjoyable 4 hours at Winter Wonderland Manchester. There were clear signs that we had a good time when:

If you’re looking for an indoor day out over Christmas and New Year, then Winter Wonderland Manchester might be for you. However, it might not be for all families, depending on the age and maturity of the children!