It isn’t often you get a star of children’s TV coming to little old Dewsbury. However, somehow, someway, Mr Bloom found the time to leave his prized allotment and take part in this “Brass n Bloom” Brass Band concert.

If you have been following the blog, you’ll know that I am a big fan of the Scarborough Spa Orchestra (link here) and so we are a used to child friendly concerts. This certainly lived up to expectations.

We got there early, ok, a little too early, only to find the doors had not opened. However, the crowds were forming already! As we got in, we headed to the front to allow Heidi additional dancing room and then we explored. The good thing about the concert was that there were things to do before the show. There were music workshops which were just long enough to entertain, but not tire out the little ones, as well as musical instruments to play on.

However, the star of the show also did a relaxed meet and greet with the little ones. Perhaps as you would expect, Mr Bloom was so relaxed, approachable and good with the kids! 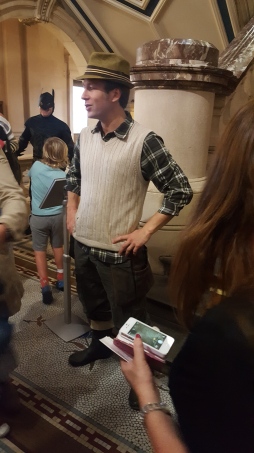 And so onto the music. I am in no position to say whether the correct notes in the correct order, but it certainly sounded good from the front row! If they do another one, I may not sit quite as near to the front however!! They played child friendly tunes, including Frozen . As such, there was plenty for the little ones to enjoy.

Mr Bloom did a 15 minute set at the start of both halves – including his ukulele (who knew!) with some audience participation. As a result of Heidi being slightly overconfident, she put her hand up to answer a question and then nerves took over which meant I had to answer! However, a couple of weeks on, she is still made up that she answered a question from Mr Bloom-ish!

Another good part of the almost 2 hour Brass n Bloom show was the excellent costumes that the band were in. Everything from Batman and Robin to a Teddy Bear! This was especially good during the half time interval seeing them wandering around and interacting with the children. The audience level dropped off a little bit towards the end, but that is completely understandable given the age of the target audience. However, those who were at the front enjoyed a good dance towards the end. Some parents watched on, fearing that their child would crawl under the stage!!!

It was so good to see so many people turn up to enjoy an afternoon of good “traditional” music. This was made really accessible to an age group who don’t usually get included in these types of events. The fact that the local music group “#Musica” were on the stage as well might have inspired some of the school aged children to give music a go.

Hopefully Brass n Bloom will be a semi-regular thing in the region, and given the audience, it has every chance!!

To read more of my blog, please feel free to:

Email me at: [email protected]